I have had these 3 beef shanks sitting in my freezer for like 6 months and I kept on putting off making osso bucco because I Had fresh meat to use. Well now it’s spring and I was putting it off because, well it’s spring, and osso bucco is kind of a cold weather dish. But I ran out of food and decided to make it anyways. I still think it’s best served on a winter day, but using only white wine and adding the gremolata really lightened up the dish. SO without further ado, here is my take on osso bucco.

Ingredients for the stew

Ingredients for the Gremolata

Directions for the stew

You can serve the meat and stew separate as I did, or preferable you have shallow wide bowls in which you can serve the stew and shank together. Make sure you top this with the gremolata which really impacts the flavour. And enjoy 🙂

I bought some goat when I was last up in Ottawa mostly because I have never in my life had it and thought it would be interesting. But then came the inevitable *wait… what they heck do I cook with this* thought. Needles to say, Google came to my rescue and since what I had was stewing pieces of goat, I really only had 2 options. (1) Stew – which I do all too frequently and (2) curry – but not just any curries, there were an abundance of recipes specifically for Jamaican curries. So I looked up a bunch or them, bought some curry powder and did what I always do with recipes… that is. looked up about 10 different ones, looked for the common element and then make up the rest.

No wonder my boyfriend doesn’t understand my cooking method. I almost never follow a recipe unless it’s baking… and even then. So just so you know… 99% of my recipes have at least 2 ingredients who’s measurements have been approximated because I cook to taste. I’m sorry!

Anyways…. This was what I did. 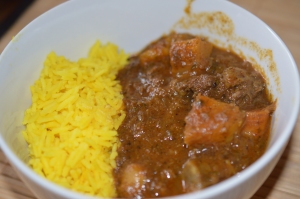 In general I live a pretty healthy lifestyle. Unfortunately there is a bit of a pendulum effect and the more strict you try to be the more you want to rebel against these restrictions. That’s why I maintain that you sort of have to “sneak up” on health changes.

I have been a little bad over the past few months. Not consistently bad. My eating and exercise are still probably 80% there, but the other 20% is way worse than it should be. I have been indulging in sweets and alcohol too often and my portion sizes seem to be creeping up along with the scale. I’ve tried to reaffirm my good habits with some goal settings, but I’ve been undisciplined for too long now. My will power has gotten a little lazy as of late.

So let’s take it back a notch. Baby steps.

Let’s do a daily and a weekly goal for now and just get that will power flexing again.

Zero sugar – this includes raisins, which I have been indulging in, honey, maple syrup and artificial sweeteners (other than stevia)

Goals for the week:

No grains – I have been having popcorn too often because it’s a grain that is gluten free and I love it, so not allowing any grains this week will help kick that to the curb.

No dairy – my skin has been breaking out from all the dairy I’ve been consuming between the yogurt, the lattes, and the cheeses. No more!

Get in 4 workouts – I’ve been pretty consistent with at least 3 workouts per week, but I want to get in that extra one.

No alcohol – I don’t typically drink very often, but there seem to have been a few too many “occasions” recently.

The reason I am not making these overarching goals is because I won’t stick to it 100%, which is fine… usually. But I’m going off my plans a little too often so taking things day by day and week by week makes it way easier. I can commit to just about anything for a week… that’s only 7 days!

Next Monday I’ll let you know if I succeeded. 🙂

One of my goals for this year is to buy more food locally. In trying to keep with this sentiment I have purchased meats from local farms (naturally raised meats) and headed down to the St. Lawrence Market this past Saturday to pick up some produce and support the local economy. 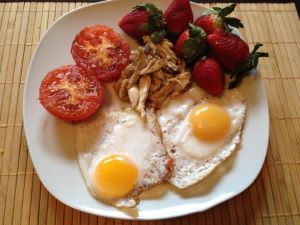 I realize I have not shared a recipe with you in absolute ages and since I have recently been cooking with some more interesting items like those mentioned above, I thought this is the perfect time to share.

The duck eggs I just cooked sunny side up and did not season with anything because I wanted to really taste them and notice if there were any differences. I would say that the yolk was creamier and denser with a slightly buttery taste. It was delicious… oh and the shells are green! This may have been why I bought them

Anyways, on to actual recipes:

For me, lamb and cumin are two flavours that just go, so this recipe is pretty heavy on the cumin, just adjust if you are not overly fond of the combo (it makes it taste kind of like a gyro) 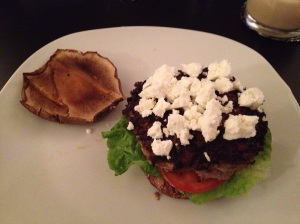 Please do not grease the pan unless you are using extra lean lamb. It already has a lot of fat in it that will coat the pan as it cooks. I had to drain the fat off throughout the cooking to avoid “frying” the burgers.

Also note that the addition of bacon is always good idea, I just didn’t have any on hand. So if you do, make you mouth happy and add bacon. 🙂

I will be the first to tell you I am vain; I like looking fit. It is motivating for me and I like the idea of “wearing” my passion. When I look good (i.e. look like a fitness model) I feel like my impact on people is greater because they see that I have accomplished something myself. But something interesting has happened in this last year and I think in large part it is thanks to blogging.

Suddenly I am more interested in health for health’s sake and less concerned with looks.

It is for this reason that I have been looking more into paleo, hormones and eating clean because the idea of eating for how our bodies are designed makes a lot of sense to me and the science is now catching up with that logic.

The science is indicating that things like wheat and legumes are in fact damaging our bodies, fat is actually a vital source of energy and nutrients, and refined sugars are one of the worst things you can put in your body.

One of the things that I really want to start doing more is buying local and fresh, which is something that the paleo community really pushes. This not only supports your community’s economy, but actually boost you immune system.

Why would a red pepper grown 30 miles from my house be any better than one grown in another country? You might ask.

1. Nutrient content depletes the older the food is and local food is way more likely to have been picked recently and allowed to ripen before being picked. Certain food are a lot more susceptible to this and you can see it happening. Have you ever bought a bunch of dark green spinach and left it in the fridge for a week? It may have goone bad, but if it didn’t I bet it lost a lot of its colour. That loss of colour is indicative of loss of nutrients. Things like aliums (garlic and onions), potatoes, cauliflower and carrots don’t really lose their nutrients because they are hardier, but even these are beneficial to buy local because…

This image was selected as a picture of the week on the Malay Wikipedia for the 46th week, 2009. (Photo credit: Wikipedia)

2. Local foods are grown in the same environment you are, which means they are exposed to the same allergens and soils that you are exposed to. Honey is a particularly good example of this; the bees take pollen from various flowers (that same pollen that causes my hayfever, for instance) and they make honey out of it. As long as the honey is unprocessed, you will then ingest that pollen and expose yourself to small amounts of those allergens. You are essentially inoculating yourself! How awesome is that!

I am a 20-something trying to find balance between working long hours at the office, being fit and finding time for family, friends and love.